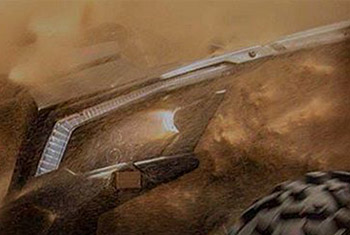 The last week has seen a storm of new product releases from Polaris for its incredible 2017 line-up and alongside that excitement comes a teaser from Can-Am for an all-new side-x-side. The big questions remain, what is it and where is Can-Am taking us on August 16th?

Can-Am is pushing limits in many categories, but it’s no surprise the Commander has been around the longest. Is it possible with the release and wide acceptance of the Polaris General and now the 2017 General-4, Can-Am has created a new version of this sport ute and is taking a defensive stance with an ultra sporty yet utility-capabable Maverick based vehicle?

Maybe, but from the first teaser video we think it looks too wide to be a sport utility side-x-side, which leads us away from the 3-seater rumors that’ve been floating around.

The wide wheels sticking out past the fenders in teaser #1 suggest it’s sporty, the aggressive power-sliding would lend to that notion as well and what looks to be sand on the ground again heads down the road of ultimate pure sport buggy.

So if this is the case has Can-Am walked away from the chassis fundamentals of the current Maverick? Probably not. There’s a lot invested in the Maverick’s design and it’s a good vehicle in both two and 4-seat configurations.

However, the interior layout of the Maverick has always been a point of argument with performance drivers and the turbocharged 1000 Rotax can’t have that much left under the hood to boost past Polaris’ 144 HP 1000 XP Turbo, so what is the X-3?

Much like the RZR XP evolved from the base RZR design, the X-3 is going to be the competition-crusher that Can-Am Pure sport enthusiasts have been waiting for.

Expect to see a full overhaul of the entire vehicle from frame and suspension to cockpit layout and engine design. The seating position would need to be dropped to the floor and reclined into an aggressive Wildcat like layout, while the motor package would be sent further back in the chassis.

When you dig into the available motor packages from Rotax there’s a lot to choose from. While we can only hope one day a manufacturer puts a 2-stroke into any new offroad vehicle we doubt we’ll see it happening anytime soon. So with that said a motor like the Rotax 904 producing 105 HP could be the answer and with a supercharger mounted to it, well you could be in neighborhoor of a 150 horsepower.

Another possibility would be the V-twin 998cc Spyder motor with the tune up the Aprilia RSV Mille received at 143 HP, that’s a Rotax naturally aspirated motor built for a high performance motorcycle.

A turbo or supercharger on that motor would capably and reliably push horsepower in the 160 horsepower range without an issue.

At the end of the day we are all left speculating untilthe sheets are pulled off at the BRP dealer show on the 16th of August. Can-Am won’t sit still for too long and with Polaris pushing so hard to stay in first place, the only attack plan with a competitor this strong is a full frontal assault with a vehicle that doesn’t just compare, but aims to dominate it in every way like the 2016 Can-Am Defender did with the XP 900 Ranger.

There’s one thing you don’t want to do and that’s underestimate the potential of BRP’s incredible engineering team. There’s never been a shortage of rabbits to pull out of their collective hats! AJ Lester
AJ is Co-Host of DIRT TRAX Television which can be seen on OLN and Sportsman Channel in Canada, Outdoor Channel across America and globally on our YouTube channel.
Previous articleFXR RECOIL LITE TRILAMINATE JACKET
Next articleKAWASAKI MULE SX