WHAT’S UP WITH THE ATV BIZ? 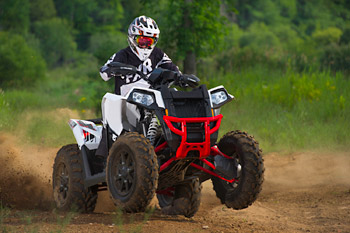 This tells us clearly that ATV activity is still extremely popular and ATV riders are still super active. What we’re seeing are plenty of older ATVs (in the range of 3 to 7 years old) with upgraded tires, shocks and other aftermarket equipment.

It may be of interest to note that even though side-x-sides are selling like ice water in a blast furnace, it’s estimated the market is somewhere around 300,000 units a year.

That’s a far cry from what the ATV market was for well over a decade. In its hayday – and it wasn’t that long ago – there were in the neighborhood of a million ATVs being sold worldwide per year. Those 4-wheelers are still out there and they’re being used – a lot.

Another thing we’ve observed is that not necessarily everyone who buys a SxS is an ATV user. Many are, but many aren’t, and some hardcores who own ATVs will confess “you can take my ATV from my cold, dead hands” before they’d invest in a SxS.

We think there’s going to be a positive shift in the market as the economy keeps getting healthier and sales will start to surge upward over the next couple of years. Riding an ATV is just too much fun to see things continue the way they’ve been going.

Dirt Trax Onlinehttps://www.atvmag.com
Check back frequently for new content and follow us on social media!
Previous articleRZR HIGH-FLOW MESH PERFORMANCE SEATS
Next articleWHO WILL BE NEXT WITH A TURBO?