WHO ARE THE INNOVATORS? 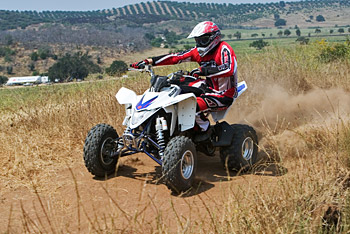 The ATV biz is a relatively new one. Not many ATVs, at least as we know them today, existed prior to the mid-1970s.

The low-pressure tire ushered in the age in the late 60s and although the fat-tired 3-wheeler died an untimely death at the hands of the media in the early 80s, the industry soon retaliated with something far better – the 4-wheeler.

The Dirt Trax staff was ruminating the other day about who is responsible for the most innovation in the 4-wheeled ATV era. Many of our readers and viewers probably won’t remember this, but Suzuki is actually responsible for creating the first 4-wheeled, mass produced ATV.

The original Quadsport was the first of its ilk and it was an absolute breakthrough at that time, outperforming the best of the existing 3-wheelers by a wide margin. Fortunately, patent laws did not hold the industry back and many 4-wheeled iterations from both on-shore and Japanese OEMs were soon offered.

The CVT transmission was first offered in a mass-produced ATV built by Polaris. Actually the original 3-wheeled Polarii all had CVTs and it became a Polaris benchmark, soon copied by nearly everyone else. Polaris was also first to offer true, full-time 4WD on its ATVs, running boards and independent A-arm rear suspension.

More recently, electronic fuel injection was added to the innovation list and honors for this technology were shared by both Suzuki and Polaris. EFI has become an industry standard on big-inch iron and is one of the most sought-after ATV features today.

Then there’s electric power steering. Yamaha was the first to get this technology to market, followed soon afterwards by Honda and the rest of the herd.

Kawasaki pioneered the multi-plate, wet rear brake system and the use of a V-twin engine while Can-Am invented the spar frame and was first to adopt Visco-Lok, an auto engaging diff-lock for the front drive.

Who are the innovators? Just about everyone – and the ATV industry is one of the most fruitful motorsport segments because its participants are always thinking, always inventing!