WHY NO RZR COMPETITORS? 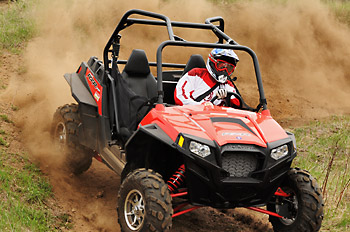 With sales of the Polaris Razor going through the roof, we have to marvel that no other OEM has stepped up with a viable competitor… yet!

The RZR success story is virtually unparalleled in the history of the off-road industry and has put Polaris over the top as the world’s largest producer of off-road powersports vehicles (ATVs, UTVs and RZR combined).

It’s still all about money, and in a weak economy, the sales of an RZR-type vehicle really boost the bottom line.

From what we saw, this vehicle is much further down the road than just the dream stage. Even with an advanced prototype in the works, it looks like Cat will not have the new Wildcat ready for at least another 18 months.

Meanwhile, the Polaris plant in Roseau, Minnesota will continue to crank out every Razor it can build to a fresh market that is salivating for “buggy-style” performance side by sides.

Polaris has been very smart in moving forward full steam with exciting variations of the RZR like the RZR 4 and the RZR S and now, the new 900 XP.

Power steering has been added to several versions and there are so many trick paint and graphics packages available you can virtually customize your RZR order to your liking.

By the time the next competitor steps up, Polaris will have bitten off a huge share of the segment.