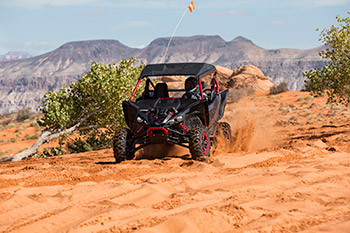 Testing off-road vehicles is never something we regret doing. No guff, right? We know it and we’re the first to admit we are very fortunate to be able to do this for a living.

Sometimes though, you leave a destination and a riding experience so unbelievable, so exhilarating, you can’t stop thinking about it. This is one of those times.

Being the only guy in the Dirt Trax crew to not get saddle time on the YXZ1000R SS has been bothering me for too long. When the chance came up to test one in the majestic backdrop near St. George, Utah… I quickly claimed this adventure for myself.

The red rock and sandy terrain accented with mountains and an oasis-like lake was surreal but what I really came there for was to put the YXZ1000R SS paddle shifting beast through its paces.

As usual, Yamaha encouraged us to push its machine to the limits so once we were set free to let er rip, I put the SS on course for some down-right abuse. The YXZ loves to rev, in fact it takes some getting used to because it performs best when you let it scream before hitting the next gear. The lesson learned here was to think one gear lower than what felt “normal”. Once I accepted the fact the YXZ was actually at its best when worked this way, my confidence as a driver quickly became something I’d never experienced before.

Driving confidence was multiplied tenfold for two main reasons. First, the paddle shifting experience is hands-down the greatest thing I’ve encountered on an off-road vehicle. I’m not exaggerating. I found myself shifting more often and gearing down to increase RPM to get mega-grunt in corners and power shifting where I would have normally just been happy to maintain touring speed. What results though, when you have such ease of shifting, is truly remarkable and enlightening.

I would be remiss if I didn’t talk about the other key and unique feature which inspires unparalleled rider confidence, the suspension on the YXZ1000R. The specially designed FOX Podium X2 shocks on this machine are nothing short of heavenly. After our first abusive half-hour lap I told one of the Yamaha guys I almost felt guilty for pounding the machine so hard. He chuckled confidently and said, “That’s what it loves… keep at it.” I can, and will, get into a more in-depth explanation on the details of these shocks in a future article but for now all you need to know is this. If I was handing out medals for shocks, they would have to create a new Platinum category because the X2 Podiums (ridefox.com) are so much better than anything else I’ve ever tested.

For a rider who is usually happy to set the speed on cruise-control (that’s me), I found myself feeling like I could push harder and ride aggressively. I felt perfectly in control but the racer-like thrill consumed me for the first time riding a SxS or for as long as I can remember. In that moment I was Corry Weller (corryweller.com)…wait, umm…I was Dustin Nelson. Yeah – that’s right.