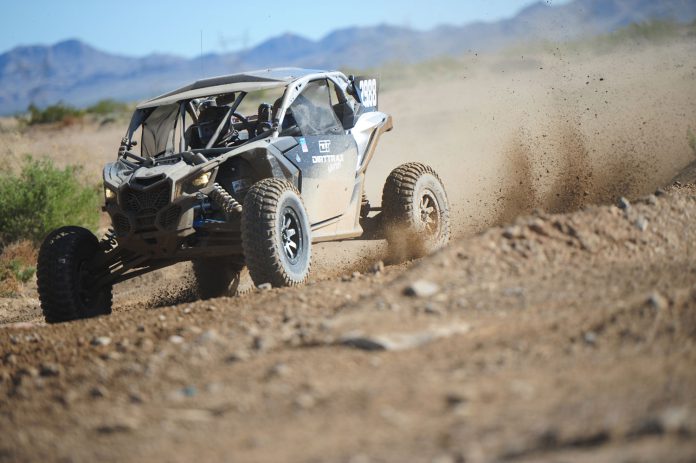 Prepped and loaded Thursday night, the RWS / DirtTrax / Ultimate Terrain Can-Am team was ready to take on the next SNORE race: Battle at Primm.

Drivers Mitchell Alsup and Bradley Howe were looking to clinch their second win this season after locking down the W last month.

Battle at Primm is a two day event running the same 60 mile course each day.

On day one, Howe was in the driver’s seat. The green flag dropped with Howe starting mid-pack in class. Within the first 20 miles, Howe moved through the field taking the lead. The course was extremely muddy and the car was covered with it but Howe never let up.

Over the next forty miles, his lead on the pack grew. Howe settled into a groove, conserving the car while maintaining a comfortable lead, taking the checkered flag with a flawless run.

The team prepped the Can-Am Maverick X3 Xrs for day two, checking every nut, bolt and joint. Prep for the second day is very important because a bad run or DNF could throw out the entire weekend. All systems checked out for day two prep and the team was ready for battle again.