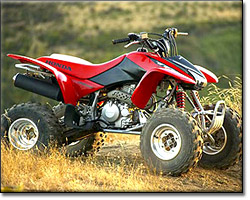 We were pleasantly surprised to hear about the improvements Honda has made to their venerable 400 EX, now called the TRX400EX.

Some in the industry suspected Honda might eliminate the EX as we know it and replace it with a liquid cooled version.

While a small bore liquid cooled Pure Sport ATV is still possible from Honda, we are pleased to see the air cooled 400 EX return with reverse gear.

At its sales peak before the arrival of a plethora of Pure Sports competition, the 400 EX was rumored to be selling as many as 25,000 units annually.