ANOTHER WEEKEND OF RACING SUCCESS FOR BRP 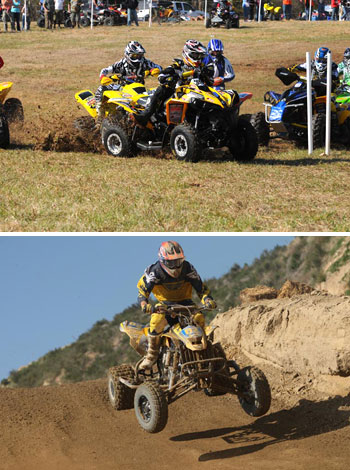 “This past race weekend is when the 2009 ATV racing season begins in earnest for everyone,” says Del Bohlman, Racing Manager for Can-Am ATVs at BRP. “And with our success across the board during the weekend, it is safe to say we are ready to bring BRP more championships this season and start where we left off in 2008. All of our racers, teams and staff are ready to go and cannot wait for the next rounds of racing.”

During round-two GNCC racing in Georgia, Can-Am Outlander™ ATVs swept the 4×4 classes, while the DS 450™ fought hard in the afternoon XC1 Pro class. A Renegade™ 800R ridden by Team Warnert Racing / Can-Am pilot Rick Cecco won the U2 class easily after taking the holeshot against the rest of the class. Cecco’s teammates; Bryan Buckhannon, Michael Swift and Cliff Beasley; each won the 4×4 Open, 4×4 Limited and 4×4 Lites classes respectively. Jamie Bithell, who races for the Can-Am X-team, took second in the competitive College A (16-21) class on his DS 450.

The ITP Quadcross opening round of the 2009 season was completely dominated by the Can-Am DS 450. Team Motoworks / Can-Am racer Jermie Warnia was on the warpath against the rest of the Pro field. In the 450 Pro class he took the holeshot in the main and maintained a lead throughout the race. He did the same in the Open Pro class, taking the holeshot and never relinquishing the lead. Warnia’s teammate, Dillion Zimmerman, in the amateur 4-Stroke Expert class took the win on his DS 450.

For the AMA ATV Motocross Championship, Can-Am racers worked hard throughout the weekend and are prepping for the second round to build on the two top-10, Pro-class finishes by Team Warnert Racing / Can-Am rider John Natalie and Team Motoworks / Can-Am racer Jeremy Lawson. Both riders raced their DS 450 ATVs hard against the rest of the Pro field on Sunday’s final motos.

Round three of the GNCC series will be March 21 near Morganton, NC, while the AMA ATV Motocross Championship travels to Pell City, AL for round two during the same weekend. Round two of the ITP Quadcross championship will take place April 12 near Buckeye, AZ at the Arizona Cycle Park. For more information of Can-Am racing, our 2009 contingency program and amateur DS 450 support program, please visit www.can-amxteam.com. .

Bombardier Recreational Products Inc. (BRP), a privately-held company, is a world leader in the design, development, manufacturing, distribution and marketing of motorized recreational vehicles. Its portfolio of brands and products includes: Ski Doo® and Lynx™ snowmobiles, Sea Doo® watercraft and sport boats, Evinrude® and Johnson® outboard engines, direct injection technologies such as Evinrude E TEC®, Can Am™ all-terrain vehicles and roadsters, as well as Rotax® engines and karts.

Dirt Trax Onlinehttps://www.atvmag.com
Check back frequently for new content and follow us on social media!
Previous articleWimmer on Top at Glen Helen
Next articleNew Growth for SnowTrax and Dirt Trax Television