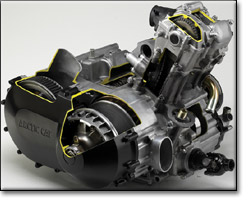 In an effort to offer its customers more choices, excellent value and to better control their destiny as an ATV manufacturer, Arctic Cat has designed and will assemble its own ATV engine. It’s called the 650 H1, and it will debut on a new Arctic Cat 650 H1 4×4 Automatic.

With liquid cooling and a thermostatically controlled auxiliary fan, the H1 engine delivers consistent operation in all conditions. The name “H1” comes from its hemispherical-shaped cylinder head and single-cylinder design.

The 650 H1 engine will be assembled near the corporate headquarters in Thief River Falls at a new, state-of-the-art 24,000 square foot facility. The Engine Division was conceived in the summer of 2000. Three years in the making, the engine is scheduled for a debut later this year.

The H1 was designed and built using the latest manufacturing technology to ensure exact, quality standards. Likewise, each new engine will be thoroughly tested before being placed in an ATV.