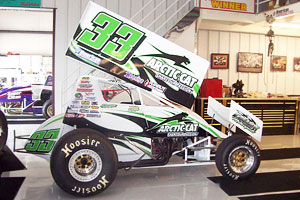 Arctic Cat has partnered with Danny The Dude Lasoski as the title sponsor for his number 33, 410-class sprint car at the upcoming Knoxville Nationals in Knoxville, Iowa.

Reigning from Dover, MO, Lasoski has 92 feature wins in the 410-class at Knoxville, and hails as Knoxville’s All-Time feature winner, and seven-time 410 track champion.

His Arctic Cat green, black and white Sprint car wearing the latest Arctic Cat logos, is sure to be a show-stopping fan favorite.

As well in the 360-Class, watch Curtis Evans, as his car proudly displays Arctic Cat-sponsored graphics.

Evans is a favorite of the 360-Class, and is currently ranked third in points on the Winged Outlaw Warriors (WOW) Series.

Arctic Cat is also named the Official ATV of the Knoxville Speedway. Pella Equipment of Pella, Iowa is the current Arctic Cat ATV provider to the speedway.