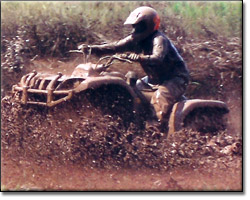 That all changed in the 2005 Mi-TRALE/Y-101 ATV Super Challenge Series. At the first event in June, the Suzuki King Quad, driven by Michigan’s Jeff Walters forced a Nashville, Tennessee driver, Eli Gustafson, on a Yamaha Grizzly into the second of a Double Elimination feature. Walters pulled off the upset and was the first to derail Yamaha’s TOP DOG reign of supremacy.

Then Walters came back to defeat a different Michigan Driver, Jason Sullivan, on a Grizzly at the second event. Walters and his King Quad went undefeated at that event.

Now it’s the Grand Slam finale, Ewen, Michigan, Saturday, September 24th. This ATV Super Challenge is a part of the Ewen Log Jamboree and takes place at the permantly built ATV Super Challenge track in this Western Upper Peninsula community. It will be at this event that Tennessee’s Gustafson is set out to put Yamaha back in Victory lane.