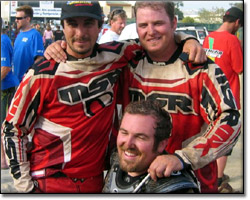 The Baja 500 is one of the most grueling races in the world – but Temecula Motorsports and Alba Factory Honda were riding Maxxis, tires tailor-made for tough terrain. And that Maxxis advantage, along with skill and determination, led to an electrifying 1-2 finish for the two teams in the overall ATV category. The race was held June 2-4 in Ensenada, Mexico.

Honda’s Chad Prull started fourth off the line and had a two-minute lead by Honda pit one, where he handed the quad off to Wayne Matlock. Matlock extended Honda’s lead to 12 minutes by Honda pit two. Prull then got back on for the next 156 miles and carried an eight- minute lead into the pits, where Matlock took over 186 miles from the finish.

Temecula’s Mike Cafro started ninth off the line and picked up two positions before giving way to Danny Prather, who battled his way to second place. Cafro got on again for the grueling ride over Mike’s Sky Ranch. Cafro held second place into San Vicente, where he gave way to Levi Marana ten minutes behind Matlock. Marana rode the wheels off his Honda 450R and gained almost three minutes on Matlock before Prather got back on for the ride to the finish.

Struggling without third gear through a technical section, Prather was nearly 12 minutes behind Matlock at Honda pit seven. About 15 miles after this pit, a booby trap put Matlock over the bars and sent him cart-wheeling through the desert. Getting back on, he crossed the finish line first, but Danny Prather rode the final 50 miles like a man possessed and carried Temecula over the line soon after Matlock. Temecula took the win after adjusted time.

Maxxis congratulates Temecula Motorsports’ Danny Prather, Mike Cafro, and Levi Marana, along with Alba Factory Honda’s Wayne Matlock and Chad Prull for proving yet again that Maxxis is the brand of champions.

Dirt Trax Onlinehttps://www.atvmag.com
Check back frequently for new content and follow us on social media!
Previous articleCat Track ATV Track Conversion Kits
Next articleWhat Does Polaris Have For 2007?