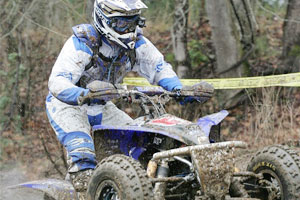 Once again Yamaha’s Bill Ballance found himself up against the ropes in the Can-Am Grand National Cross Country Series, and once again the eight-time GNCC Champion stepped up to the challenge.

With two-straight GNCC wins, Ballance finds himself just nine points out of the series’ points lead heading into his home-state race this weekend.

“It’s Kentucky, my home race,” says Ballance, a native of Oakland. “You know I’m going to be out for a win there.”

FRE KTM’s Adam McGill would love nothing more than to defeat Ballance here. Last year, competing as a privateer Honda rider, McGill led most of the race and appeared headed to his first career overall victory, until Ballance passed him in the next-to-last corner to steal a victory.

McGill is a different rider this year, though. He won three-straight races earlier this season on his new KTM, and holds the series’ lead. The West Virginia rider needs to stop Ballance’s momentum this weekend, though, in order to maintain his points lead.

The rest of the GNCC XC1 Pro field looks at Kentucky as a last chance to establish title hopes. The seventh round of the tour means the series passes through the halfway mark with this event. Rockstar/Yoshimura Suzuki’s Chris Borich finds himself a disappointing fourth in points with just one victory this season.

In contrast, last year he carried a four-race win streak into the Kentucky race. Borich has shown speed, but small mistakes seem to thwart him each weekend. On the opposite end, Team Excell Motorsports’ Bryan Cook racked up consistent finishes to hold third in series’ points.

The rest of the field features a mix of persistent veterans and eager newcomers. Veterans Matt Smiley (XCBob.com) and William Yokley (The National Guard) look as strong as ever, but young talents like Taylor Kiser (FRE KTM) and Brandon Sommers (GT Thunder Yamaha) have turned heads with strong podium finishes this year.

Can-Am’s trio of talented riders, Chris Bithell and Chris Jenks (Warnert Racing Can-Am) and Brent Sturdivant (Team LTERacing.com Can-Am) hope to rebound this weekend after tough luck at the last few races. Privateer racers like Ryan Lane and Jarrod McClure are looking for first-ever podiums this weekend and could get it with the right breaks.

The XC2 Pro-Am class features a battle between the next generation of GNCC talent, with GT Thunder Yamaha’s Don Ockerman leading the charge.

In the 4×4 Classes, Michael Swift, Cliff Beasley and Bryan Buckhannon lead their classes on Can-Ams.

The race, held just past the Kentucky Motor Speedway off of Exit 57 on I-71, is expected to draw nearly 1,500 competitors and several thousand spectators. Riders will race on a custom-built track including jumps, mud, hills, rocks and trails.

Spectator passes are $15 for the full weekend, with pro pit access and pro autographs at no additional charge. ATVs race on Saturday and bikes race on Sunday. Youth riders race at 8 a.m., beginner riders race at 10 a.m., and the top amateurs and the pros race at 1 p.m. For more information, check out the official series website at www.GNCCRacing.com or call 304-284-0084.

What: The Can-Am Grand National Cross Country Series (GNCC), America’s Largest Off Road Racing Series. Cross-country racing is one of the most physically demanding sports in the world.

The nearly three-hour long GNCC races lead as many as 1,800 riders through tracks ranging from eight to 12 miles in length. With varied terrain including hills, woods, mud, dirt, rocks and motocross sections, GNCC events are tests of both survival and speed.

When: May 31 and June 1, 2008. Four-wheeled ATVs race on Saturday. Motorcycles race on Sunday.