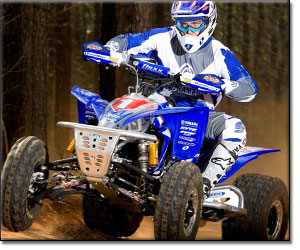 Bill Ballance took a second straight win with his victory at the Snowshoe GNCC ATV race, consolidating his lead for the overall title.

Riders on Razrs swept the podium at the event, with Chris Borich in second place and Matt Smiley taking third. The first-ever Snowshoe GNCC ATV was held June 23 in Snowshoe, West Virginia.

“There was probably three miles of the track out there that was just as gnarly as probably anything we ever see on any track throughout the whole season,” Ballance told gnccracing.com. “At one time there was five or six of us together, I think Chris and Matt and Bithell, and we come into that one section and everybody started splitting off and going different directions, and I picked a line and thought, ‘Oh Lord, this is way out of the way, I’m getting ready to get passed by a bunch of people,’ and wound up getting on through it, and wound up being an easier but longer line and I didn’t get hung up, and I think I got around those guys right there. I just put my head down and started pushing.”

Maxxis gained its 21st straight Holeshot Award when Borich took the lead at the start of the race. Chris Jenks took seventh place, and Brandon Sommers, who scored an overall top ten finish with ninth place, took his seventh Pro Am victory of the season.

Maxxis congratulates defending GNCC ATV champ Bill Ballance, and thanks all of its sponsored riders for proving that the performance and durability of Razrs are second to none.