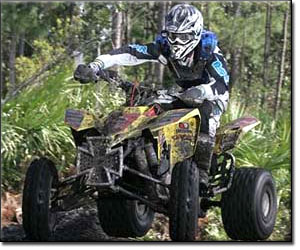 Chris Borich started the 2008 Can-Am Grand National Cross Country Series with a new team and new machine, but his performance looked quite similar to year’s past.

“I came down here a few months ago to get ready, and I tried and tried to break this thing and I couldn’t,” said Borich of his new Suzuki LT-R450. “I got a midpack start, not the greatest, but the Yoshimura motor just pulled through. I caught up to these guys, I knew Bill (Ballance) was out front so I pushed to get up there and get the lead. Then I just tried to check out.”

Borich fought off KTM’s Taylor Kiser first, and then later cruised to the finish unchallenged. Cook kept pushing for second, while Ballance overcame mid-race crash to get third.

Cook, who collected just one podium all last season, was thrilled to take second. “I brought in a lot of new people this year, some of the people who I used to work with back in my amateur days,” said Cook. “I didn’t know how my conditioning would be. I was done. My hands were bad. I just had to dig deep. My hands were so torn up I could barely hold on to the bars.”

Ballance started the race by grabbing the ITP Holeshot award, and then battled at the front of the pack before crashing mid-way through the race. “I was trying to reserve some energy, but I think I was in reserve too long,” said Ballance. “Down here in Florida it’s always hard to guess how much to reserve, because it’s such tough terrain. I was running in second or third place, and I had a pretty good crash. I was laying on my back and had the wind knocked out of me. So I had to just start pushing as hard as I could and I was able to get this Yamaha up here on the podium.”

Kiser hung tough for fourth with his teammate Adam McGill fifth, a solid debut for the new KTM team.

The XC2 Pro-Am class featured a big battle between the next generation of GNCC stars. Brian Wolfe led early, but eventually GT Thunder Yamaha’s Don Ockerman took the lead and held off David Crane to take the win. Third went to Tyler Lenig.

In the two-hour morning race, Tom Clark Motorsports Honda’s Angel Atwell staked her claim to a big 2008 season by taking the Women’s class and the overall win.

Defending Women’s Champion Traci Cecco took second on her factory Yamaha after a crash, with Warnert Racing Can-Am’s Michael Swift turning in the top utility machine performance by finishing third overall and winning the 4×4 Limited class on an Outlander 800.

To get to the track, take I-95 to the Melbourne Exit at State Route 192.  Go west on Route 192 (12 mi) to Kempfer Road. Turn left on Kempfer Road and travel two miles to the event.