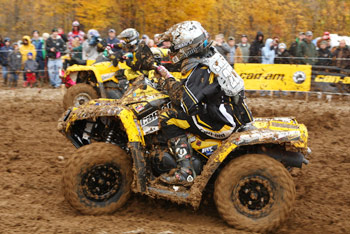 Team Warnert Racing / Can-Am saw two big victories at the final round of the 2009 GNCC season near Crawfordsville, Indiana.

However, before those key victories even happened, both riders had to deal with some of the worse racing conditions in recent memory.

“That Buckhannon was able to dominate the final round of the season in these conditions proves how hungry he was for that championship,” Jimmie O’Dell, Racing Manager for Can-Am ATVs at BRP. “He and Swift rode fast and smart and it paid off with an overall win and a third. This has been an awesome season for team Warnert / Can-Am and we are excited to build on that momentum in 2010.”

Torrential rain swept through the area in the days and hours leading up to Saturday’s races.

The saturating rain, combined with the course’s hills, made for some gigantic bottlenecks of racers in the morning. The course was so tough, Racer Production officials made the decision to reroute and shorten the course for the afternoon session.

At the end of the two-hour morning session, 40 racers did not finish the race and only 29 completed the full six laps. Regardless, Swift was able to preserve his perfect 13 for 13 season, finishing third overall in front of almost 400 other riders.

Buckhannon broke his leg earlier in the year after winning six races in a row on his Outlander 800R. After that crash, he knew it would be tough to come back and defend his 4×4 Open championship.

The equation, however, was simple at the Ironman GNCC, a win by Buckhannon would mean a championship. He did just that, and even more taking the overall morning victory.

In the U2 class, Can-Am X-Team racer Jeremie Dudding took the victory on his Can-Am Renegade 800R EFI ATV. In the Women’s Novice class, Cassie Carlson finished the season with a win aboard her Can-Am DS 450 EFI ATV.

Cliff Beasley, who already had the 4×4 Lites class championship, easily won his class aboard his Can-Am Outlander 500 EFI ATV. Wrapping up the weekend was Chris Bithell who narrowly missed out on an afternoon podium finishing fourth overall in the XC1 Pro class on his DS 450.

In all, Can-Am took home four GNCC championships in 2009 and will be hunting for more in 2010.

Dirt Trax Onlinehttps://atvmag.com
Check back frequently for new content and follow us on social media!
Previous articleDo I need A Clutch Kit?
Next articleDalton Mud Runner Kits for Outlander and Renegades