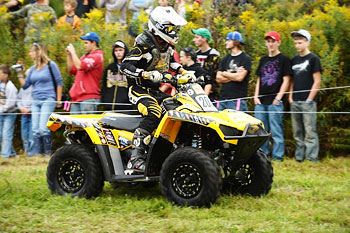 With the summer break behind them and three rounds still left in the 2009 Grand National Cross Country season, Can-Am ATV racers have already secured championships aboard Can-Am ATVs.

Warnert Racing / Can-Am racer, Michael Swift, rode his Can-Am Outlander 800R EFI ATV to the 4×4 Limited class win at Round 10 of the GNCC championship this past weekend at the famed Unadilla Valley Sports Center near New Berlin, New York.

In doing so, Swift secured the 4×4 Limited championship for 2009 and continues his unbeaten streak this season despite taking a knock to the head on the first lap.

His teammate, Cliff Beasley, took first in the 4×4 Lites class on his Can-Am Outlander 500 EFI ATV, and also secured a class championship. Beasley rode a smart race and took the lead for good on the fourth lap of the rough, 10-mile course.

“To have two championships wrapped up this early is a testament to the hard work and dedication Swift and Beasley have put in this season,” says Jimmie O’Dell, Racing Manager for Can-Am ATVs at BRP. “Both of these riders rode their Warnert-prepped Outlander ATVs smart all season long and never lost sight of the ultimate goal: championships for BRP. Congratulations to them and the entire Warnert Racing organization.”

The third 4×4 class – 4×4 Open – saw one of the best battles of the season as Can-Am X-Team racer Scott Kilby and Warnert Racing’s Bryan Buckhannon were neck and neck to the finish line with Kilby taking the class win and Buckhannon taking second.

Both riders were on Can-Am Outlander 800R EFI ATVs, and this race represented Buckhannon’s first since he broke his leg at Round 7. Kilby is the current points leader in the 4×4 Open class.

Warnert Racing’s Rick Cecco extended his championship lead in the U2 class as he took the win aboard his Can-Am Renegade® 800R EFI ATV. Can-Am X-Team riders Jeremie Dudding and Sam Williams took second and third respectively to complete a Can-Am sweep of the U2 podium at Unadilla.

“This fourth championship feels great! When I started racing with Can-Am, our goal was multiple championships and I plan to continue winning each year. I hurt my neck a little when I banged my head on a low-hanging tree, but I am cleared by the doctor to race in North Carolina. All that is left is to try and complete a perfect season. – Michael Swift

“It feels good to win another championship for Can-Am. I had a really good race and I was able to take over the lead in the fourth lap and take the win.” – Cliff Beasley

“It was the best race of the season! The new 2010 model with the power steering really helped me out there. I was less fatigued and it handled so well it made everything seem easy.” – Scott Kilby

“It was great to be back, and to finish well after being out for so long felt really good. I felt great out there. Everything went really well; the bike handled great and had plenty of power. It was a good day.” – Bryan Buckhannon

“It felt great to go out there and take the win. My goal for the rest of the season is to ride smart and win a championship for Can-Am.” – Rick Cecco

The next GNCC race is the Yadkin Valley Stomp GNCC near Yadkinville, NC on September 26. For more information on Can-Am racing, our 2009 contingency program and amateur DS 450 support program, please visit www.can-amxteam.com.