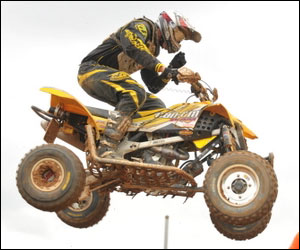 This is Lawson’s best finish for the year and he is consistently improving with each race.

“Jeremy Lawson is a rider we view a s someone who will give us results each week end,” said Del Bohlman , Product, Media Relation and Racing Manager for Can-Am ATVs at BRP . “With his top-five finish we are extremely excited to have him racing a Can-Am DS 450.”

John Natalie , who is currently fourth in points in the AMA Pro ATV class, was battling an eye injury he sustained at the last national.

With the eye injury, he wasn’t able to ride as aggressively as normal. Natalie finished eighth overall after taking fifth in the first moto.

In the amateur ranks, Cole Henry rode his DS 450 X to a first-place finish in the competitive 450 B class.

Henry went 1-1 in the class and beat out more than 30 other racers in the class for the weekend overall. He ranks in fourth place in the 450 B class points.

“The Epic team did a great job . We made a couple changes to my set up and it worked awesome. I ‘ m really looking forward to the next round. I ‘ m hoping for another top 5 finish.”

“When I crashed at Ballance MotoX I got something in my eye and it scratched my cornea really b ad. I ‘ m feeling OK, but I can’t see very well, which is a big issue out there racing.”

The next round of the ITP/Moose Racing AMA/ATVA A TV Championship Series is May 10-11 at Sunset Ridge MX near Walnut, IL .