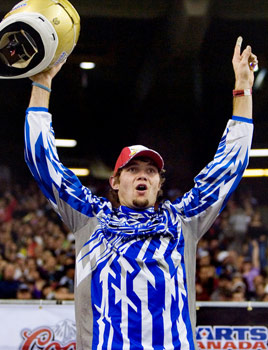 Chad Wienen made his Team Motoworks / Can-Am debut in exciting form as he dominated the Montreal Supercross race on his Can-Am DS 450 EFI ATV at Montreal’s Olympic Stadium.

Wienen made it look effortless as he quickly passed his way to the front of the field during the main event, going on to win in convincing fashion.

He bested Motoworks teammate John Natalie by 20 seconds, and former Kawasaki teammate, Josh Creamer, by more than 40 seconds in the 10-lap race.

“Chad Wienen was able to accomplish one of the earliest goals in the DS 450 project: a Montreal Supercross win,” says Jimmie O’Dell, Racing Manager for Can-Am ATVs at BRP. “To see Chad and John on the top two podium spots was very special for all BRP employees; those two riders raced very hard for Motoworks and everyone involved in the DS 450 program.”

Along with Wienen and Natalie, Can-Am X-Team racers Cody Miller and Richard Pelchat established the DS 450 as the machine to beat early on in the race.

Both riders were up front, however a nagging shoulder injury would force Pelchat to retire early. Miller narrowly missed the holeshot and was at the front for most of the first lap.

However, a tangle near the end of that first lap forced Miller to the rear of the field. From there, Miller mounted an amazing comeback, passing nearly everyone on the tight and narrow track. He barely missed a podium position by a half-second margin.

Amazingly, Natalie was able to stay in front of the 18-rider field, despite damaging a key component of his steering system early in the first lap. Natalie had to struggle with his race ATV to track straight, and muscle his way in left-hand corners. However, even with the front-end issues, he easily passed lapped traffic and distanced himself in front of third place.

“The track was pretty technical and you had to be precise in your riding, but it was really fun and I had a great time. It felt really good to go out there my first time on the Can-Am and take a win. I’m really excited about the upcoming season and I think, with Motoworks and the Can-Am DS 450, we really have a winning team and a shot at the motocross championship.” – Chad Wienen

“They put us on the exact same track as the bikes so it was challenging but really fun. The Motoworks Can-Am has a great set up and I feel really comfortable with it and it seems to be well suited for my riding style. The Montreal Supercross is a really great event. I wish that there was an indoor supercross series for quads because I think it would really help promote our sport and take it to the next level.” – John Natalie

The Motoworks / Can-Am crew now heads back west to its home base in California for more testing in preparation for the upcoming ATVA ATV Motocross National Series that will begin next Spring. For more information on Can-Am racing, our 2009 contingency program and amateur DS 450 support program, please visit www.can-amxteam.com.