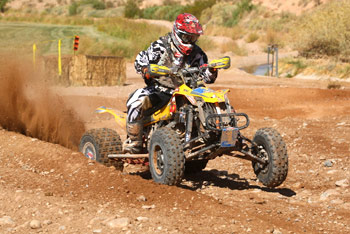 Team Motoworks / Can-Am took three of the top four spots in the Pro Class aboard the Can-Am DS 450 EFI ATV at the final round of the 2009 World Off-Road Championship Series held outside Mesquite, Nevada this past weekend.

Even though Motoworks racer Josh Frederick took the Pro class win by three minutes, he came up two points shy of winning his third WORCS championship in a row. Teammates Jeremie Warnia and Chad Wienen finished third and fourth respectively.

“We knew it would come down to this last round of racing to determine the Pro championship and Josh went out and did all he could to win that third title,” Jimmie O’Dell, Racing Manager for Can-Am ATVs at BRP. “He knew he had to win this last round and he did, that’s all we could have asked of him. We are proud of Josh and the entire Motoworks / Can-Am team, they worked hard all season long and it shows with two riders in the top three of the Pro class points.”

Frederick was forced to sit out the fifth round of racing due to multiple injuries sustained in a nasty crash and he was able to come back and race in the sixth round despite not being fully recovered.

Newly signed Motoworks racer, Chad Wienen, used this final round to get more seat time on the DS 450 as he prepares to race the AMA ATV Nationals next year with teammates John Natalie and Warnia.

Team Motoworks rider Dillion Zimmerman raced in the Pro class since he had the Pro-Am class championship wrapped up one round early. He raced his DS 450 to a top-10 finish and ended up eighth in his Pro debut.

Dirt Trax Onlinehttps://www.atvmag.com
Check back frequently for new content and follow us on social media!
Previous article2010 Amphibious ARGO 8×8 and 6×6 Lineup
Next articleDo I need A Clutch Kit?