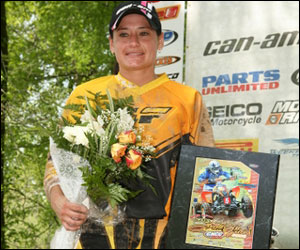 Coulter finished second overall and second in her class. This puts her in third place in the Women class points and within striking distance of first place.

“Lexie Coulter is quickly becoming a force in GNCC racing.” said Del Bohlman, Product, Media Relation and Racing Manager for Can-Am ATVs at BRP . “She was able to battle tough conditions and an unprecedented amount of lappers to finish on the podium, we are extremely excited to have her racing Can-Am ATVs.”

Michael Swift of Team Warnert Racing / Can-Am took his fourth win out of five races in the 4×4 Limited class aboard his Outlander 800 TM ATV.

Swift’s teammate, Clifton Beasley won his fifth race in a row in the 4×4 Lites class. Beasley continues to dominate t he class on his Outlander 500 TM ATV.

X-Team racer, Bryan Buckhannon continued his streak of wins in the 4×4 Open class; Buckhannon has five wins in as many tries.

“I stayed back a little on the last lap so I could get a feel for what lines I wanted to take, and I made some good choices. It feels pretty good to be on the podium again!”

Round six will take the racers to the Wiseco John Penton GNCC near Millfield, Ohio. The race will take place on May 10.