Butler and Holz Take Firsts at WORCS Round 4 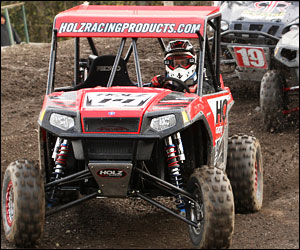 Angela Butler had another nice win in the Women’s A class with her Outlaw 450 MXR.

Butler is standing strong, leading the Women’s A class for the series.

Side-by-side racing newcomer, Mark Holz steered his RANGER RZR to the win in the Rhino Mod class by beating 11 side-by-sides.

This was Holz first race in the RANGER RZR.