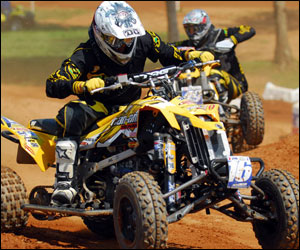 Team Epic continues to refine the team and the Can-Am DS 450s as they moved into Round 4 of the AMA/ATVA ATV Championship series at Birch Creek MX in Danville, VA.

The #16 of Lawson got a good start in Moto 1 and rode to strong a sixth place finish. Unfortunately Gee and Sage Baker would tangle on the second corner and be forced to ride from the back of the pack.Â Gee finished 16th and Baker finished 17th in Moto 1.

For Moto 2 Lawson started the Moto mid pack but started picking off riders one by one, eventually moving into 5th place for the Moto. Gee rode to a 12th place finish after a difficult start. Baker just could not get any luck and tangled once again in the second corner. He settled for a 17th place finish in Moto 2.

Overall finishes for the weekend were Lawson 5th, Gee 14th, and Baker 18th. Team Epic team manager Brian Winters said, “We are very pleased with Lawson’s first top five finish for us. This is a brand new team and brand new bike. Look for Epic riders to be on the podium very soon.”

Team Epic is back to the shop in Illinois preparing for Round 5 of the ATVA National series, to be held in Walnut, IL on May 9-11, 2008.