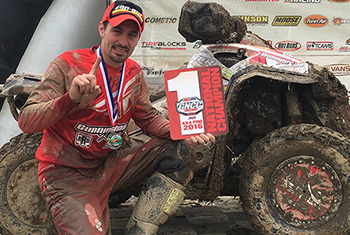 Can-Am ATV and side-by-side vehicle racers put on a dominating show at round 12 of the Grand National Cross Country (GNCC) racing series, sweeping both the XC1 Pro UTV and 4×4 Pro ATV classes in St. Clairsville, Ohio.

Can-Am 4×4 ATV Racing
In the 4×4 Pro ATV division, Can-Am 4×4 racers went 1-2-3 for the third consecutive race. Cody Miller notched his second straight 10 a.m. overall and class victory and third victory on the season to climb into sole possession of third place in the class point standings.

Riding his Cunningham Racing / Can-Am Renegade X xc 1000R ATV, Kevin Cunningham took the runner-up spot to Miller at Powerline Park, which earned him enough points to wrap up the 2016 4×4 Pro ATV Championship with one round remaining. For the season, Cunningham has tallied 291 points thus far by notching four wins (one 10 a.m. overall) and 10 podiums. In the last six GNCC events, Cunningham has posted three of his victories and six total podiums. That late-season momentum certainly helped push Cunningham to the class title.

The 4×4 Pro ATV class third place position at round 12 went to Can-Am Renegade X xc 1000R racer Bryan Buckhannon. Although, the multi-time champion wasnt able to take home the 2016 title, his own impressive late-season run that saw him post six consecutive podiums pushed him to second place in the point standings. Buckhannon continued to expand upon his GNCC legacy, adding one win and seven podium finishes thus far in 2016.

Miller, who took second at round 12, continues to impress behind the wheel of his Can-Am Maverick X xc 1000R. In his first full season of GNCC racing, the Texas racer has notched two wins and is a perfect 5-for-5 in podium appearances. Miller will need to finish in the top 15 at the Ironman GNCC finale, Oct. 29-30, in Indiana, to secure the coveted XC1 Pro UTV title. On the season — one in which hes competing in both ATV and UTV Pro classes — Miller has earned a total of five class wins and 10 podiums.

Can-Am racers also won the XC2 Pro Sport UTV (Hunter Miller), XC3 Pro-Am UTV and Amateur Limited UTV classes in Ohio. Dave Plavi is the current points leader in the Pro Sport UTV class, while Josh Davis has climbed to within two points of the lead in the XC3 ranks, after notching his second win of 2016 in Ohio. Three Can-Am pilots will carry their three-man race for the Amateur Limited UTV class crown at the Ironman finale, as just five points separate first place from third place.