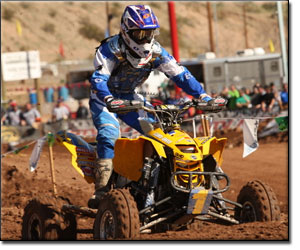 This is his second victory in as many tries in the WORCS Pro ATV class this season and his third WORCS Pro ATV-class win on Can-Am’s DS 450 going back to last season.

Josh Frederick really stunned everyone during that memorable race, as he had to do an unscheduled pit stop which put him in the last spot. He only had one goal in mind and it was to prove that he and his Motoworks Can-Am DS 450 could regain the top spot.

Excitement could be felt in the crowd as he managed to do the impossible by becoming the leader of the pack in the 7th lap by chewing away a two-minute gap on the leader and cross the finish line in the top position with almost 1 minute ahead of YFZ-mounted Dustin Nelson.

“We are so excited to have these results this weekend,” said Johnny Leech, Team Motoworks / Can-Am owner. “Our pits were electrified when Josh (Fredreick) came across the line in first. Everyone feels confident right now and with continued hard work it will help us step toward giving Josh his second WORCS championship this year.”

In the Open Pro class, Frederick’s teammate, Brandon Smith, took the win by about three minutes aboard his Team Motoworks / Can-Am DS 450 for the class win. In the amateur classes, Motoworks’ Dillon Zimmerman took the win in both the Pro-Am and Open A classes, also on a DS 450.