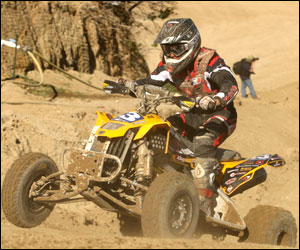 The weekend marked his much-anticipated debut on the Can-Am™ DS 450™ ATV, with Natalie riding to the fifth-fastest lap time in qualifying practice earlier during the race weekend. His lap time was just behind Epic Racing/Can-Am’s Greg Gee, also on a DS 450.

“To have everyone qualify and take a fourth overall made for a great national motocross debut for the Can-Am DS 450,” said Del Bohlman, Product, Media Relation and Racing Manager for Can-Am ATVs. “We are improving each week and this just gives us more motivation to work even harder for the next race.”

The first race of the season saw all five DS 450 riders qualify to the weekend’s two Pro 450 motos and saw two DS 450 ATVs finish in the top 10. Team Epic Racing/Can-Am’s Sage Baker put on an impressive ride on his DS 450 for ninth overall.

“I’m really excited about this season. Can-Am/Warnert really came through. I think this was probably the best debut I could ever have. There were only a few jumps on this track, so I can’t wait to go to Alabama for the next round and really put the suspension to the test.”

“The bike was running good. We made a couple of small changes for the second moto and it was even better. It is really nice to have the support this year so I can concentrate on racing instead of everything else.”

The next round of the ITP/Moose Racing AMA/ATVA ATV Championship Series is March 29-30 at Mill City Raceway near Pell City, Ala.