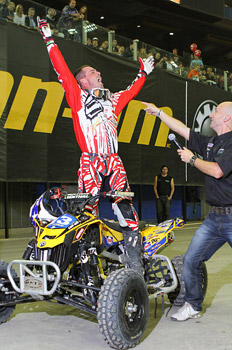 “Everyone at BRP looks forward to this event each year and we were all proud to see John Natalie lead the sweep of the podium at the race,” says Jimmie O’Dell, Racing Manager for Can-Am ATVs at BRP. “It was a historic moment for BRP when John, Richard Pelchat and Cody Miller took the podium in front of thousands of race fans!”

The track was one of the most technical ATV courses the professional racers had ever seen at the Montréal SuperMotocross. While the course proved challenging for the field, Natalie was able to pull the holeshot and walk away from the other racers, winning by a margin of more than seven seconds.

Last year’s champion, Team Motoworks / Can-Am DS 450 racer Chad Wienen, took fifth in the race after battling with his teammate Natalie for the opening laps of the race. Both Natalie and Wienen consistently put up the fastest lap times in both the main event race and qualifiers.

“I was pumped to go out an win in front of all the fans, especially all the representatives from BRP that made the trip from Valcourt to Montréal to watch us race. It was exciting to stand on top of the podium with the Can-Am DS 450!” – John Natalie

“The track was a true supercross style track and it was really tough and technical, but it was pretty fun. I crashed hard and my leg was swelled up to the size of a watermelon, but I still went out there and got on the podium, so I am pretty happy with that,” – Cody Miller

“I felt pretty good out there. The track is similar to my track at home, so even though it was technical, it didnt really bother me much. I was glad that our team finished well with John taking the win, and I was able to finish in the top five.” – Chad Wienen