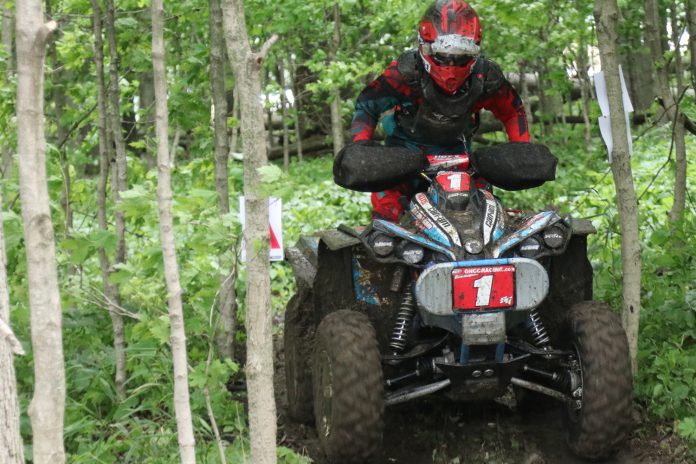 Can-Am off-road racers had great success this past weekend on racetracks around the country, notching several victories and numerous podiums.

At Round 10, Ellis completed 12 laps in 12:21.253 to earn the win. He followed up that podium celebration with another one, after posting his second win of the weekend in the Prod Turbo UTV class at round 11. This time out, Ellis completed all 12 laps in a time of 12:29.494 to reinforce that his first Lucas Oil Regional victory wasnt a fluke.

To learn more about Elliss experience behind the wheel of his Can-Am Maverick X3 side-by-side, racing, mixed martial arts and more, check out his weekly podcast called “ELLISTRONICS” on iTunes and Google Play.

Ultra4 Racing
Can-Am Maverick X3 racer Casey Scherer won UTV Pro class at the 5th Annual Ultra4 Racing MetalCloak Stampede this past weekend at Prairie City State Vehicle Recreation Area near Sacramento, Calif. Scherer, who was the top qualifier on Friday, was on point in the finals in his No Limit SxS / TeamAwesome/ Can-Am. A good start and second-place running had Scherer in good position for the win. As the final event wore on, Scherer found his way to the front to notch the class win. He completed 8 laps in a time of 2:12:55.

After qualifying first on Friday at the Twin Cities Takedown in Elk River, Minn., Chaney drew a four on the inverted start and was forced to begin the race in row two. By lap three, however, Chaney piloted his Can-Am Maverick X3 side-by-side back up to the front of the pack. Despite his best efforts, Chaney had to end up settling for second place, which ultimately was enough to put him in the points lead – by 15 points – and in the drivers seat in his chase for a TORC championship. A severe storm with heavy winds and rains canceled round four.

ATV
GNCC
Factory Can-Am ATV racers Kevin Cunningham and Bryan Buckhannon recorded another 1-2 finish in the Grand National Cross Country series. Cunningham won the 4×4 Pro class and the 10 a.m. overall at the Tomahawk GNCC in Odessa, N.Y., posting the fastest five-lap time (2:08:37.5) aboard his Can-Am Renegade X xc 1000. Cunningham has now notched six wins in seven rounds and owns a 38-point lead over the runner-up (Buckhannon) with six rounds remaining on the season. Buckhannon has four second-place finishes to go with one victory on his Can-Am Outlander 1000.