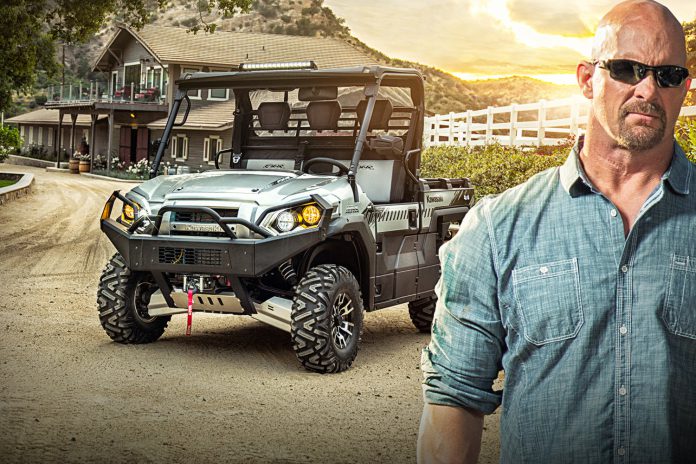 Kawasaki Motors Corp., U.S.A. (KMC) is proud to announce its new advertising campaign with Hall of Fame Wrestler Steve Austin to follow the introduction of the all-new MULE PRO-FXR™ side x side. Austin, a television and movie personality and creator of the hit show “Steve Austins Broken Skull Challenge,” has been working with KMC since 2015. He will host commercials primarily featuring the MULE PRO-FXR model, and showcasing the full line up of MULE™ side by sides. He will also be the face of technical videos highlighting the benefits of the MULE vehicles, and showing just how Kawasaki STRONG they are, alongside Kawasaki chief product developers.

“Steve Austin is a class act; a rugged, self-made man who built his success through hard work, which makes him the perfect ambassador for our Kawasaki STRONG MULE lineup,” said Kawasaki Vice President of Marketing Chris Brull. “Hes an authentic guy and genuinely excited about the MULE PRO-FXR brand. Like Steve, the new MULE PRO-FXR side x side has the strength to work and play hard.”

As a part of the Kawasaki MULEs 30th anniversary celebration, be on the look out for the television spots on a wide array of channels, including: ESPN, Outdoor Channel, The History Channel, CBSSN, FS1, FS2, RFD-TV and DirecTV. The commercials which are live now, and technical videos which are set to air later this year, will be available for viewing on KMCs website, located at www.kawasaki.com, and its social channels: Facebook.com/KawasakiUSA; Instgram @KawasakiUSA and YouTube.com/KawasakiUSA.

Developed alongside the MULE PRO-FXT™ and PRO-FX™ models, the new MULE PRO-FXR side x side shares the same engine and smooth acceleration, meaning its still the fastest most powerful MULE ever built, with independent suspension, powerful disc brakes, effective engine braking and EPS, speed-sensitive power steering. All of that is packaged into a more compact design, shorter than the other MULE PRO models, with improved ground clearance and turning radius.

Designed to appeal to someone who likes to play as a hard as they work, the styling of the MULE PRO-FXR side x side has a tough, truck like appearance with a painted hood, grill, front and rear bumpers. It features premium components such as low-profile LED inner and a seating capacity for three with its contoured two-tone seats. Its powered by a 812cc three-cylinder fuel injected engine that offers plenty of power with smooth acceleration and sits on a STRONG chassis which provides nimble handling and a tight 14.1-foot turning radius.

While it has a recreational side, the MULE PRO-FXR is still built Kawasaki STRONG with steel cargo bed that has a 1000-pound carrying capacity (600-pound carrying capacity in California) and the ability to tow up to 2000 pounds. With this much capability, the MULE PRO-FXR is sure to impress your neighbors, even if the closest one is a half-mile away.

ABOUT KAWASAKI
Kawasaki Heavy Industries, Ltd. (KHI) started full-scale production of motorcycles over a half century ago. The first Kawasaki motorcycle engine was designed based on technical know-how garnered from the development and production of aircraft engines, and Kawasakis entry into the motorcycle industry was driven by the companys constant effort to develop new technologies. Numerous new Kawasaki models introduced over the years have helped shape the market, and in the process have created enduring legends based on their unique engineering, power, design and riding pleasure. In the future, Kawasaki’s commitment to maintaining and furthering these strengths will surely give birth to new legends.

Kawasaki Motors Corp., U.S.A. (KMC) markets and distributes Kawasaki motorcycles, ATVs, side x sides, and Jet Ski® watercraft through a network of approximately 1,100 independent retailers, with close to an additional 7,700 retailers specializing in general purpose engines. KMC and its affiliates employ nearly 3,100 people in the United States, with approximately 260 of them located at KMC’s Foothill Ranch, California headquarters.

Kawasakis tagline, “Let the good times roll.®”, is recognized worldwide. The Kawasaki brand is synonymous with powerful, stylish and category-leading vehicles. Information about Kawasakis complete line of powersports products and Kawasaki affiliates can be found on the Internet at www.kawasaki.com.

Dirt Trax Onlinehttps://www.atvmag.com
Check back frequently for new content and follow us on social media!
Previous articleAdvantages of the Polaris Ranger EV
Next articleCan-Am Racing Update