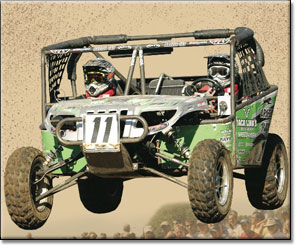 The 2007 World Powersports Association National UTV season is now in the books, and Team Arctic placed 2 Prowler teams in the top 4 spots.

Kyle remarked about his results, “I had a lot of fun in the Pro Supersport series. The Arctic Cat Prowler is a stout machine that really takes a pounding. Some of these jumps are monstrous, but with a little bit of tuning our Prowlers ran really strong and outpaced our competitors.”

Kyle’s SPI Racing teammate, Daryl Rath took fourth place honors and commented, “Our team worked really hard on these Prowlers, I look forward to racing them in the future.”

The championships and awards didn’t end for Arctic Cat in the UTV division. In the Quad Terrain Challenge, Jesse West won the Championship aboard his Arctic Cat 650H1, while his brother Josh took Pro Rookie of the Year honors. Bringing home Third place title was SPI Racing’s Rory Beckman.

“I couldn’t be much happier with how our season went,” said Arctic Cat Race Manager Ted Bettin. “The Team Arctic/Jack Links/SPI Racing Prowlers were quite fun to watch and pretty entertaining for the crowd. The SpeedWerx crew did a great job race tuning our 650H1 motor. The Prowler proved there’s a new performance player in town.”

So what’s next for Arctic Cat? Bettin says, “We learned a lot from the Pro SuperSport racing series. This is a rapidly growing market and Arctic Cat plans to expand its boundaries!”