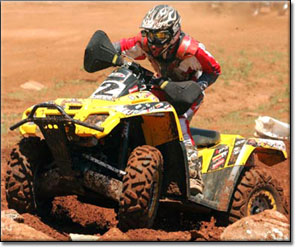 Chris Borich took the holeshot and the win in the QuadTerrain Challenge Pro Stock final at the Southwestern National.

After surrendering the lead momentarily on the first lap, the Warnert Racing/Can-Am team member gained it back and never saw another challenge to his position out front.

He worked his Can-AmTM OutlanderTM 650 H.O. EFI around the hilly and demanding course masterfully even though it was his first time competing in the event this season.

“When we signed Chris Borich we were well familiar with his talent on a sport ATV,” said Bernard Guy, ATV marketing director at BRP. “But now he definitely showed how versatile he is by winning this race on an Outlander 650 ATV; we are excited to see Borich at future rounds as a member of Warnert Racing/Can-Am team.”

Borich joined Scott Kilby, Chris Bithell, Brady Foster and Adam Vaughn out of the Warnert Racing/Can-Am semi at the third round of the WPSA ATV Tour held at Cooperland Raceway near Stillwater, Oklahoma.

Bithell, who was racing the QuadTerrain Challenge for the first time, worked his way up to second before getting tangled in the boulder section of the course.

After remounting his Outlander ATV, he worked his way from last to tenth. For his part, Kilby was leading the points championship when going into the round. In the final, he finished seventh aboard his Outlander 650 ATV after a strong run.

The next round of the WPSA ATV Tour heads to London, Ky., for the Blue Ridge Open Championship June 16 and 17.