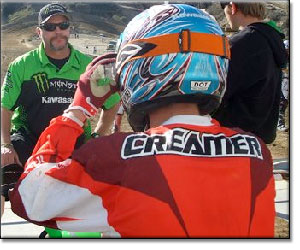 At the start of the first moto, Creamer was able to get a good jump and exited the first turn in third.

He stayed close with second place and when the rider made a mistake, Creamer capitalized and moved into the runner-up spot where he would finish the moto.

In moto two, Creamer got an even better start moving into second. He rode consistent and finished the eight-lap race in the runner-up position.

“I was happy with my starts today and my Kawasaki has been running really well,” said Creamer. “Coming to these races has really helped us move forward and make this a bike that you’ll see up front come next season.”

Creamer and the Monster Energy Kawasaki ATV team will compete in select events before making their return to the World PowerSports Association ATV Tour in May 2008.