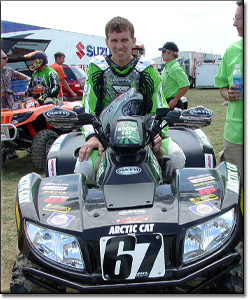 For the Arctic Cat team of ATV racers, it all came down to the last round of WPSA’s Quad Terrain Challenge to see if Daryl Rath (#67) could bring home a championship for the Thief River Falls, Minnesota based manufacturer. When the last checkered flag of the weekend dropped at Raceway Park in New Jersey, Daryl Rath was victorious.

Rath reflected on the series, “This is a great accomplishment for the Arctic Cat Factory as well as anyone who owns an Arctic Cat. The whole idea of racing this QTC series literally started three days before the first round in London, Kentucky. I approached Arctic Cat engineers, told them I thought their machines were tough enough to handle the abuse, we broke one out of the crate on Thursday, headed to the race and won the first two rounds!”

WPSA doesn’t call this the Quad Terrain Challenge for nothing. It’s not a motocross race on utility quads, but a challenge race with large brutal mud, log and rock obstacles. Rath goes on to say, “We came from behind quite a bit this season, but I just kept charging and never gave up. I’ve been training really hard, but I owe thanks to Arctic Cat and my 650 H1. Without the ground clearance and durability of this machine, I’d probably still be stuck somewhere.”

Rath wasn’t alone, Arctic Cat placed four racers in the top 8 spots, Joe “The Outlaw Duncan (#220), Jesse West (#888), and Kevin Johnston (#225) all had a solid year at the front of the pack. “We are proud of all our racers and especially our Arctic Cat-built 650 H1 machines”, said Kale Wainer of Arctic Cat. “We proved our 4×4’s are extremely durable in stock trim while racing in an accelerated test atmosphere like the Quad Terrain Challenge. Without any reinforcements to our frame, we brought home several wins and podiums this year and had a ton of fun participating. It’s a good bet we will be back next year stronger than ever!”