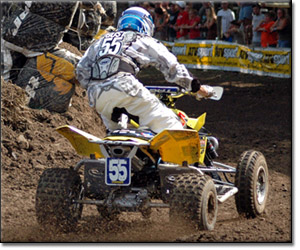 Loretta Lynn’s is known for high humidity and high temperatures. This year’s event however was fairly mild with temperatures in the 80’s and 90’s for most of the weekend. ?The only thing that was missing was the smiling face and a sizzling speed of Jeremiah Jones.? The Suzuki tent became a stopping in place for racers and fans alike offering their support and well wishes.

Doug Gust decided to run the traditional yellow plastic for the event. It’s become sort of a tradition with Team Yoshimura Suzuki to run an unusual graphics/color scheme for this race.

The first moto saw Doug Gust out of the gate first and headed for the holeshot till a missed shift relegated him to 4th rounding the first turn.? It took the “Digger” till about the halfway point to work his way into second. By then leader Joe Byrd had a large lead that proved insurmountable.

“I screwed up on the start and missed 3th or I would have had the holeshot.” Gust said after the moto. “Joe was going good and by the time I got into second, I ran out of time to try and run him down.”

The second moto once again saw Gust out of the gate well, but some bumping and banging left the Wisconsin native in 10th position rounding the 1st turn. Byrd, once again ended up in first place at the end of the first lap. The Tennessee native continuing his streak of wins at his home track.

At the end of the day Digger Doug got up to 3rd place by moto’s end which was good enough for 2nd overall honors.

This puts Doug down by 15 heading into the last race in Bowling Green, Kentucky. The championship is still within grasp ? but only with some very good luck.