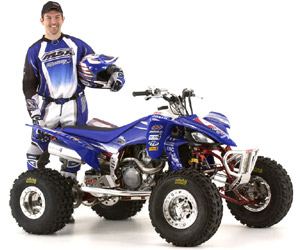 In January of 2005, fans of the ATVA Grand National Cross Country Championship Series were shocked to hear that Chad DuVall had been diagnosed with a form of leukemia.

To that point the 38-year-old West Virginia native had become one of the most successful ATV woods racers in the history of the series (top 10 in the national standings 9 times, 4 times in the top 3), and was one of the most well-liked and respected racers on the circuit.

Incredibly, DuVall went on to compete throughout the 2005 GNCC Series, and even captured three top-ten finishes, including a character-defining third overall at round seven in Millfield, Ohio. The life-threatening disease and medication required to fight it was taking its toll during most events, however, and Chad decided to announce his retirement at the end of the year.

But, thankfully, we haven’t seen the last of Chad DuVall. Good doctors, medicine and his family—as well as DuVall’s fighting spirit—have gotten control of his disease, and Chad will be returning to support the sport he loves as the official Rider Representative for ITP at all of the GNCC events in 2006.

DuVall was an ITP rider during much of his career and provided considerable input into the development of numerous ITP products, making him an ideal candidate for his new position. If you have any questions concerning ITP tires and wheels, contingency, sponsorship, or just need some advice on how to win in the woods, you can find Chad at ITP’s trackside support vehicle or next to the trail.

You won’t find a more knowledgeable and personable company spokesman anywhere, and ITP is proud to have him on our team. It’s just one more way we’re demonstrating our full commitment to the sport of ATV racing. For more information, visit ITPtires.com.

Dirt Trax Onlinehttps://www.atvmag.com
Check back frequently for new content and follow us on social media!
Previous articleKTM Becomes Polaris’ Distributor in Germany
Next articleProwler Stands Up To Competition