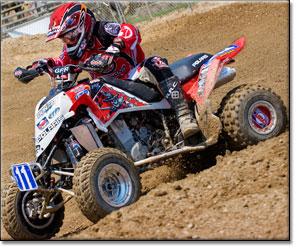 In the Open Pro class with approximately 15 Pro competitors, Eichner delivered a second place finish in heat 1 and a holeshot start and first place finish in heat 2 (leading the race from finish to end) giving Team Polaris the overall Open Pro Victory for the day beating out some very competitive teams. The 525 S ran flawlessly.

Thanks to Ross McNab of FOX SHOX for his devoted effort in dialing in the shocks and assisting trackside and to DRI who prepped the bike for the race.

Along with racing WORCS this weekend, Eichner will go for his eight win of the Pont de Vaux in France on the Outlaw 525 S, Aug. 24-26.