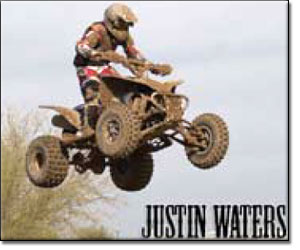 Speedworld Raceway in Phoenix, AZ was the site of the opening round of the 2007 WORCS ATV National Series. The start of the Pro Am main event would see Kenda sponsored rider and 2006 Pro Am Champion Justin Waters crashing big and suffered a broken clutch cable on his Yamaha YFZ450.

Having to push his quad back to the pits for some needed work, Justin and his team would get the lucky break they needed. According to the officials, a number of the Pro’s missed course markings on the first lap and the result would mean a complete restart of the race.

Justin made the restart in just enough time and got off the line clean. At the end of the first lap he was already in fourth place and moving toward the front. The muddy and demanding terrain was no match for the Kenda Klaw XC and Knarly XC tire combination.

After 90 minutes of riding hard, Justin crossed the finish line in first place, with over a minute lead ahead of the field. KENDA TIRES PLOWED JUSTIN TO THE FRONT!

Dirt Trax Onlinehttps://atvmag.com
Check back frequently for new content and follow us on social media!
Previous articleBRP GOES ON THE ROAD
Next articleYoshimura Introduces Rhino Pipes