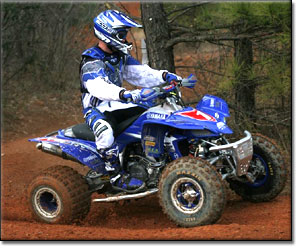 As the 2007 season began, Maxxis again proved its dominance of the GNCC ATV series, taking six of the top seven spots at the opening round.

“It’s probably the first time in four of five years that I started the season out right. I’ve been working really hard. I realize I have a chance to do something that no one else has ever done before, and that’s win eight of these championships. I want to thank my wife. She came down here to Florida with me, and she’s been living out of a hotel room for the last nine days and watching the girls, so when I came back from riding at night I could be with the family,” Ballance told gnccracing.com.

A rookie in his class, Taylor Kiser was pleased but a little surprised at his results, telling gnccracing.com that “I may not have expected it, but all of my fans were expecting me to get up here. This track lends more and more to my style, so we’ll have to see what the rest of the year brings.”