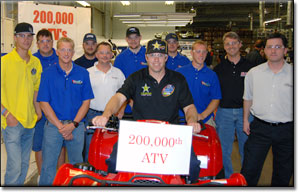 Everyone was celebrating at the American Suzuki Motor Corporation’s Rome, GA manufacturing plant Wednesday as the 200,000th unit rolled off of the assembly line. And who better to bring it home than the World Powersports Association Champion Pro racer – Suzuki’s own Doug Gust.

The plant is Suzuki’s only U.S. facility that assembles ATVs and is currently pushing out Eigers, Vinsons and KingQuads. The engine is made in Japan and shipped over.

The Rome plant opened six years ago and currently employs over 350 team members and associates. The plant currently produces about 300 units in an eight hour shift and amazingly kicked out 100,000 units during the last 18 months.

The popularity of the full line of Suzuki quads has driven up production and 2006 was a banner year for the company. They were able to increase productivity 78% through combination of adding new equipment and people to the assembly line, and improving efficiency throughout the line.

The celebration was highlighted by a full complement of riders, mechanics and support personnel from the Suzuki Pro Factory team – Team Rockstar/MSR/Pro Taper/Suzuki/Yoshimura and the Suzuki Factory Support team – Team Lost Creek/Yoshimura/Suzuki.

The factory shut down for a long barbeque lunch to celebrate the occasion. Suzuki racers Doug Gust, Dustin Wimmer, Joe Haavisto and Jason Dunkelberger were available for autographs and bench racing sessions.

After lunch, everyone was given a special tour of the plant. “It was amazing to watch one of these quads get put together,” Pro Rider Dustin Wimmer said. As the 200,000th KingQuad 700 rolled off the line, Doug Gust jumped on and rode it down to final inspection. “It was such an honor to be asked to do this,” Gust said. “It’s something I will always remember. I met a lot of really nice, hard working people who produce an incredible product.”

Suzuki’s ATV Operations Manager Rod Lopusnak was thrilled with the excitement among the plant employees. “Everyone was eager to meet the racers. The line workers came up to the riders to ask them to autograph shirts, arms and a variety of other body parts. In fact, morale was so good that even with a long lunch break, it was the highest production day of the year.”

Dirt Trax Onlinehttps://www.atvmag.com
Check back frequently for new content and follow us on social media!
Previous articleHow About an 800 Scrambler?
Next articlePOLL RESULTS