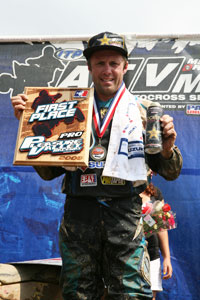 It was another successful day for Team Rockstar / MSR / Suzuki / Yoshimura / Pro Taper, as Doug Gust (#55) took the overall victory at Round 9 of the ITP Tires / Moose Racing AMA / ATVA National Motocross Championship in Johnstown, PA.

Championship leader Dustin Wimmer (#191) maintained his series lead with a strong podium finish while Chad Wienen (#44) suffered a rare and unfortunate electronic problem in moto one, hampering his overall for the day.

On race day, many heads were turned to Wimmer, who won Saturday’s Top Qualifier award. A slick track, however, had the championship points leader riding cautiously.

In the first moto, Wimmer secured a great start, but settled for a safe third place, while Team Rockstar / MSR / Suzuki / Yoshimura / Pro Taper teammate Doug Gust, also starting well, finished one spot ahead in second after a close battle for the lead.

When the gates fell for the second moto, it was Gust who grabbed the holeshot, with Wimmer close behind. The two set an incredible pace at the front, and near the midpoint of the race, Wimmer made his move into the lead.

His lead was short lived, however, as a downpour of rain began drenching the track. While pushing hard in the rain, Wimmer made a mistake and relinquished his lead to Gust. The veteran rider was not fazed by the conditions aboard his Suzuki QuadRacer R450, and he proceeded to set a blazing pace to the checkered flag that could not be matched.

The win gave Gust his second overall victory this season (2-1). Wimmer crossed the line in 4th, good enough for third overall (3-4), while Wienen finished a strong 5th for twelfth overall (20-5).

“Everything fell into place for me today,” an elated Gust explained. “My Suzuki QuadRacer R450 is a powerhouse of a bike and really did the job for me.”

Dustin Wimmer’s podium finish allowed him to extend his points lead to a massive 79 points. One more strong finish could very well secure the championship. Suzuki continues to dominate the Manufacturers’ Cup.

Team Manager Kory Ellis was pleased with the performance of the team. “Today went really well! Doug won his second race of the season and Wimmer finished on the podium with a third place and extended his points lead, so it looks like we may be able to secure the championship at the next round in Red Bud.

The Suzuki QuadRacer R450s worked really well today. Gust came out with a second place start in the first moto and had a huge holeshot in the second moto, and Wimmer was right there with him in both motos as well, so the bike was running very good!”

The next round of the ITP Tires/Moose Racing AMA/ATVA National Motocross Championship will take place July 26-27 at Red Bud Raceway in Buchanan, MI

Dirt Trax Onlinehttps://www.atvmag.com
Check back frequently for new content and follow us on social media!
Previous articlePolaris Racer Angela Butler Podiums at AMA
Next articleSuzuki Hits the Bulls-eye with the Z400 EFI