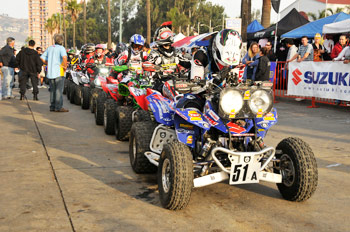 Suzuki-mounted Josh Hogan completed one of the most grueling off-road races run in the world – the Tecate Score Baja 1000 – and he did it entirely solo. Hogan’s feat was even more spectacular due to the fact that he had never raced in Baja before.

The 41st running of Baja 1000 started on November 21 in Ensenada, Mexico and covered some of the most rugged terrain that the Baja Peninsula can dish out. The Livermore, California Suzuki rider was one of 347 starters and 31 solo riders.

Hogan was one of only 18 who finished the race without a relief rider, and he did it with a time of 28 hours, 2 minutes and 50 seconds. This secured him second in the IronRider (solo rider) and 7th overall in the Sportsman ATV class.

Hogan came armed with a talented crew and the strong Suzuki QuadRacer R450. He got a quick start and made great time passing teams with up to five riders. As the night began to fall, he had set a consistent average speed of 36 miles per hour.

This slowed when he got to a section known as the San Felipe Whoops. “These monster whoops were so big that on a quad all I could do was take them slow and know that no other ATV was going to be making good time there as well.”

After a long night in daunting conditions, Hogan put his head down once the sun came up and pushed hard for the final hundred miles of the race.

“By the time I made it out of the whoops it was close to midnight and I had been riding for almost 16 hours. The rest of the night went by in a blur and as the sun started to rise I had finally reached the Pacific Ocean. The last hundred miles of the Baja 1000 was probably the most physically and mentally grueling test of my life. By the time I reached the finish line I could barely stand and it took every ounce of strength I had to twist the throttle.”

It was an impressive display of strength, skill, and perseverance, not only for Hogan, but also for the Suzuki QuadRacer R450.