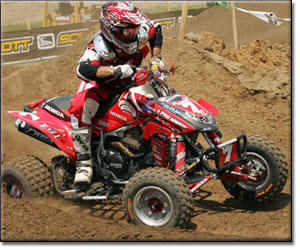 Honda TRX450R riders Joe Byrd and Jeremy Lawson put on a memorable show at the Walnut, Illinois round of the AMA Pro ATV MX series, with Byrd taking the overall win with perfect one-one motos, and Lawson keeping Byrd honest with a come-from-behind fourth in the first moto and a more characteristic second-place finish in the second.

Byrd ran off with the holeshot, but Lawson suffered a quick spin on the second lap, dropping him all the way back to fifteenth spot and setting up his heroic charge back toward the front.

At the head of the pack, Chad Wienen actually passed Joe Byrd for the lead at one point, but the Honda veteran repassed Wienen three laps later to take the win.

A mechanical problem forced Wienen out of the race. Lawson quickly took advantage, passing Gust, and then setting his sights on Brown.

Brown was keen to make a fight of it, but Lawson held him off to take second at the checker.

Dirt Trax Onlinehttps://www.atvmag.com
Check back frequently for new content and follow us on social media!
Previous articleGroup Plans ATV Adventure Across New Brunswick
Next articleSUPERTRAX CREW AT SHOWS ACROSS US AND CANADA