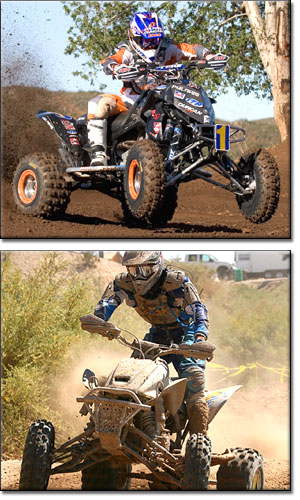 ITP’s Holeshot GNCC tires are designed to provide exceptional handling and durability in all trail riding and racing conditions, with an ideal balance of acceleration, braking and cornering performance.

Another key characteristic is the Holeshot GNCC’s light feel and smooth ride, which reduces rider fatigue during long stints in the saddle.

Look no further than the 2007 World Off-Road Championship Series for a testament to these traits. All six events conducted to date — lasting up to two hours in length on a wide variety of terrain — have fallen to riders using Holeshot GNCCs. And in three of those races it was a top-three podium sweep for these tires!

The stars of the show have been Epic Racing teammates Josh Frederick and Jeremy Schell, as well as defending WORCS champion Doug Eichner of Duncan Racing.
Frederick, of Moapa, Nevada, is currently the runaway points leader, having charged to victory in all but one event.

Schell, the three-time ITP QuadCross Series champion out of Murrieta, California, holds down a close third in the WORCS standings. Both Fredericks and Schell are in the process of developing Can-Am’s new DS450 sport quad, which may debut later this season.

On the topic of new models, Doug Eichner made history for Polaris by riding an Outlaw 525 to a big win in the fifth round of the series — it was the first Pro National-level victory for the brand, in its first WORCS appearance.

This El Cajon, California, native then put the Outlaw on the podium again in round six, and currently sits second in the standings.

WORCS racing resumes in mid-August, with four more events remaining on the calendar on its way to conclusion in November.

All carry a tough 6-ply rating and utilize a long-wearing rubber compound, yet remain amazingly light in weight.