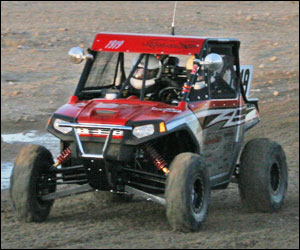 Jagged X and their No. 1919, RANGER RZR made an impressive comeback to finish second at Best in the Desert’s, “Terrible 250,” held in Primm, Nevada, on April 19.

At the fourth mile of the 90-mile course, the team was trying to pass the sixth place car and the tires on the two vehicles became tangled, causing an altercation that dropped Jagged X’s RANGER RZR near the back of the pack.

The Jagged X/Elka suspension was dialed in for this track and the Polaris quickly started regaining track positions.

By the first pit, the Jagged X RANGER RZR was back in Fifth position and by the second pit, they were running Third.

The No. 1919 actually crossed the finish line first, but due to the staggering starting times, the final results put the team in second place by barely one minute.

The finish put the Jagged X team into first place for season points.

The next race for Jagged X and their RANGER RZR is “The Blue Water Grand Prix,” in Parker, Arizona, on May 17.

Dirt Trax Onlinehttps://www.atvmag.com
Check back frequently for new content and follow us on social media!
Previous articleCREAMER STEPS IT UP AT BIRCH CREEK
Next articleButler and Holz Take Firsts at WORCS Round 4