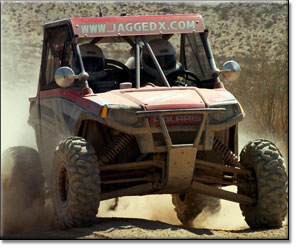 Minneapolis, Dec. 11, 2007  Jagged X’s Polaris RANGER RZR finished the Best in the Desert season with a bang dominating both the Henderson’s Terrible 400 and finishing first in the 2007 Class Champ Chase.

Winning the grueling BITD series in the first year of production is a great accomplishment for both Jagged X and the RANGER RZR, said Craig Scanlon, product line sales manager for the Polaris Side x Side Division. Polaris looks forward to supporting Jagged X’s defense of the BITD championship title next year.

Jagged X’s RANGER RZR beat the class at Henderson by almost 11 min and added to its impressive record of three firsts, one second and six finishes in six races. The RZR also finished at the top of the 2007 Class Champ Chase with 506 points, 80 points ahead of the second place finisher.

We are proud to be partnered with Polaris, The awesome Ranger RZR and their continuing commitment and support of our racing efforts have made this seasons success possible, said Bill Schueler, owner of Jagged X.