Joe Byrd Hits One Out of The Park 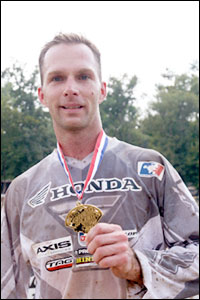 Byrd (No. 7 American Honda/Joe Byrd Riding School Honda) won two out of the four races in the special championship. He earned $1,000 for each victory, as well an extra $1,000 and a special gold medal for the overall title.

Dustin Wimmer finished second in the chase, earning a bronze medal, while the silver medal went to Jeremy Lawson (No. 16 Team Epic Can-Am).

“That was a really cool thing for the series to do,” said Byrd of the special program, which was unveiled earlier this year and featured special awards in every racing class. “Having a series within a series gave us all something extra to try to win and it feels good to be the first person to win it. It’s awesome.”