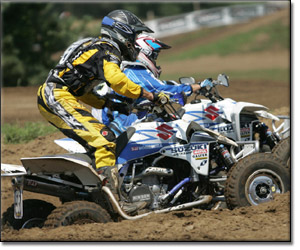 Jeremiah Jones went 1-1 this weekend making the 11th round of ATVA MX Nationals his own private playground. Jones’s back-to-back first place motos catapulted him from fourth to second in overall points. Jones is well and truly on a terror.

“In the first moto, I came out of the hole shot in second behind Harold Goodman, with Doug (Gust) right behind me. After we pulled past Harold, we put on one heck of a battle.”

Jones and Gust traded the lead for several laps. The race seemed destined to recreate another one-two punch from Team Yoshimura Suzuki. But with three laps to go, teammate Doug Gust suffered an unknown problem and bailed off of a large jump in mid-air. Fortunately, Doug was able to get away from the quad and although battered, suffered no serious injury.

“I got pretty banged up for sure.? Gust said. ?I nearly endo’d the bike and went right off the track. I went on to ride the second moto, but it was tough.”

“It’s just the worst thing that can happen to a rider,” added Team Manager Wayne Hinson “You’re in the air and coming down knowing you’re going to wreck? time to bail out! Luckily, Gust is Pro enough to know how to control a fall.

In the second moto, Jones hammered to the lead early and never looked back. “I got the holeshot and just ran a clean race from start to finish.” The competition was no match for Jones and his LT-R450, and he finished in first place with 15 seconds between him and the second place finisher.

Hinson had only a few words to describe Jones’ back-to-back domination: “Jeremiah just decimated them!”

Jeremiah was excited to have a third set of double moto wins in a GNC Championship competition. “I had a great day,” Jones said. “The bike was just haulin? for me and I was on!”

And so he was. With Jones now in second place with 219 points, he has become a serious contender for the title. Given Jones early season point deficit it seems impossible, but here he is. If Jones can pull this off, it would be one of the biggest comebacks in GNC racing history.

Gust is not to be counted out with 217 points, and the pair will surely continue to be a dangerous duo as Team Yoshimura Suzuki continues to push for wins.