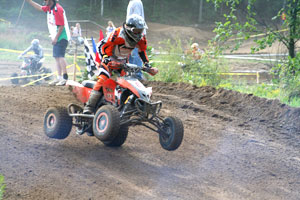 Ben has had an excellent string of top finishes this season on a mostly stock quad and currently sits second in the Ontario CMRC ATV Junior series.

Basaraba crashed hard at the top of a technical uphill series of jumps leaving Hodgson and Bailey to battle for the lead.

Bailey led most of the race with Hodgson in hot pursuit. A daring last lap pass saw Hodgson take the win and the coveted number one plate.

Later in the day the Lindsay Ontario rider also moved up into the Pro-am class to try his luck against the pro and intermediate racers.

Riding with the faster more experienced racers pushed Hodgson to raise his riding to the next level including completing a breathtaking 80 foot double twice during the race to stay in front of a hard charging Luke Lester – a former pro snowcross racer filming a segment on ATV racing for Dirt Trax television.

A last corner last lap get off cost Hodgson a forth in Pro -am but he was able to remount in time to claim fifth.

The hard charging rookie can barely contain his excitement over the arrival of his new 2009 Ktm 450 SX later this month.

This Quad is a purpose-built, race ready motocross machine more suited to the closed course racing series he competes in.

The 2008 ATV he rides now is a modified cross country machine that has proven both fast and reliable.

“I am glad we choose KTM this year and I can’t wait to race the new bike this season.” Hodgson says.