KTM Riders Round out the Podium 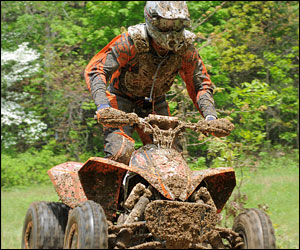 KTM riders Adam McGill and Taylor Kiser finished second and third respectively at the 6th round of the ATV GNCC Series.

The 6th round, also known as the John Penton Classic, marked a very successful day for both KTM riders. McGill got a great jump and rounded the first turn in third position off the start.

His teammate, Kiser, was a few spots back in seventh. By the end of the first lap McGill had moved into second and Kiser was sitting right behind him in third.

I was sitting comfortably in third until I got tangled with a lapped rider, commented Kiser. Fortunately, we (the top three) had pulled a big enough lead that I was able to untangle and enter the race only losing one position.

With one lap to go, Kiser caught Matt Smiley who had moved into third while Kiser was down, and passed him to take the last podium position. Kiser finished third, behind his teammate McGill who rode a solid race to take home second overall.

With six rounds down McGill still holds the series points lead over Bill Balance. The points earned at this round helped Kiser move up to sixth in overall points.