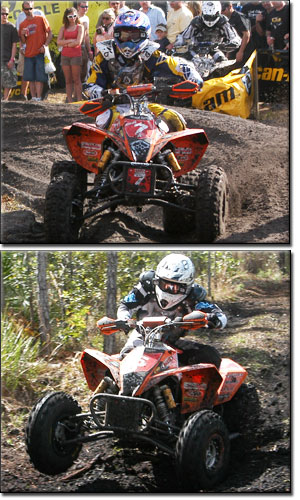 The debut of the KTM ATV GNCC Team went just as planned with Taylor Kiser and Adam McGill finishing 4th and 5th respectively on the challenging course at Round 1 of the ATV GNCC Series.

Kiser, hailing from Alva, FL, is a natural in the black sand, deep ruts and large rooted terrain that made up the course for the first round in Melbourne.

The temperature was in the high 70s and the sun was shining brightly on the riders as they lined the start straight for the launch of the race. Kiser got a great jump when the green flag dropped coming around the first turn in 3rd. McGill got pushed back and managed to come around mid-pack.

As the riders neared the dreaded swamp section about 15 minutes into the first lap Kiser was right on the rear end of the 1st place rider. They both opted to go around the swamp and came to a long sweeping turn where Kiser was able to pass for the lead.

Meanwhile, McGill had charged his way up to 11th and was steadily moving forward. “I longed for straight-aways today because it was the best place to pass. Once I gave it gas down a long straight nobody could catch me on my KTM,” claimed McGill after the race.

Kiser held the lead into the second lap until after the swamp section where he got block passed and forced into second. He fought back and recaptured the lead in the next turn.

He led for the remainder of the second lap feeling pressure from behind the entire time. On the third lap, Kiser eventually surrendered the lead but was excited that he had his KTM up front for the better part of the first half of the race. Kiser made his pit stop on the third lap; McGill pitted the lap before him.

McGill, who was clearly on the move had caught up as high as fourth position by the end of the third lap. “The power my KTM has is phenomenal allowing me to catch and pass riders quickly,” reported McGill. He held fourth until the second to last lap when defending ATV GNCC Champ Bill Balance got by.

Kiser would also challenge Ballance for third position on the last lap. “I tried to hold him off, but I was feeling tired. There were no good parts of the track but I was hoping for a long straight so I could power ahead of him, at the end he managed to get by,” commented Kiser.

When the checkered flag flew Kiser hung on for an impressive 4th place finish while teammate McGill was a few seconds back in 5th, thus giving KTM two top five finishes at the first round.

“This is a great way to start the season,” stated KTM ATV GNCC Team Manager Tim Farr. “It was nice to lead a few laps and then have both riders finish in the top five. We will continue to improve as a team and look forward to being on the podium soon.”